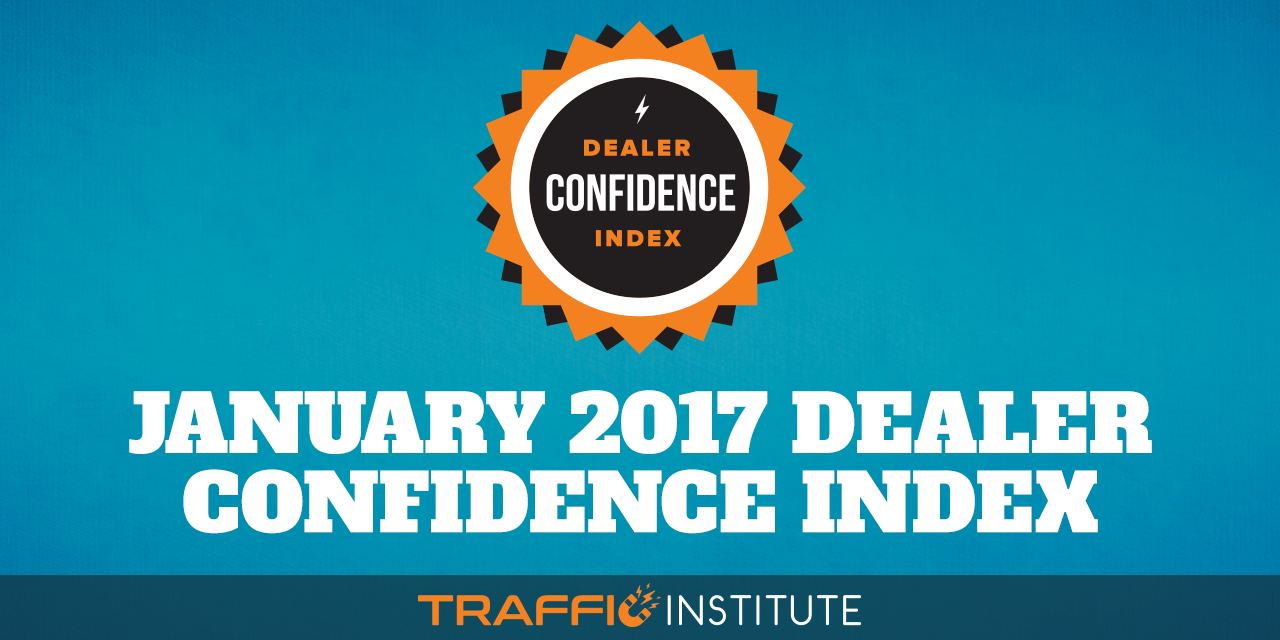 The Present Situation Index fell this quarter from -1.3 to -15.3, a 14-point drop since the end of October. While January is a notoriously slow month for car dealers, this could be a harbinger of the plateau industry experts have been predicting since mid-2016 and suggests that another record year for the industry is unlikely.

But is this drop off in sales merely due to seasonality or is there something bigger at play?

One respondent commented that they believe it’s “mostly the time of year.” And another response agreed that “winter months affect the business severely.” This is one of the reason’s why it’s so important to have a foolproof marketing plan in place that works through these difficult months and produces a steady stream of customers regardless of the time of year.

However, not all respondents agreed. One dealer noted that “the banks are more stiff and the [lending] rates higher” than they have been in the past. This theory is confirmed by the January 2017 Senior Loan Officer Opinion Survey On Bank Lending Practices (SLOOS).

The January SLOOS Report released by the Federal Reserve Bank noted that “banks responded that they expect to tighten standards on auto loans and to see asset quality of both auto and credit card loans deteriorate somewhat over 2017.” Moreover, some banks reported seeing a decrease in the demand for auto loans and a small number of banks expect to require higher down payments for auto loans in the coming months.

Despite a slow January, the Expectations Index remains positive at +11.3; however, that is a relatively sharp drop from last October’s +36.7, falling more than 25 points in three months.

Respondents revealed a variety of sources for their optimism, including but not limited to inventory, politics and seasonality.

Many responses touched on the impact additional inventory could potentially have on sales. One respondent noted that with “more used cars available” sales could increase. While another looked forward to the availability of “large off lease units.”

However, not all respondents were looking to outside sources to alleviate inventory problems. One dealer noted that “inventory drives traffic and we are going to increase our inventory an extra 45 units per month.” Regardless of how you plan on getting additional inventory, it seems clear that increasing the amount of saleable vehicles on your lot will lead to better sales numbers.

13% of respondents credited their positive outlook for the future to the current political climate. One dealer noted that “political stress [is] easing up now that the elections are over.” Another respondent said that “the election has given people confidence to possibly spend money again”—a view that was reinforced by a third respondents view that “the election is in the rearview mirror and we will have a new, better President for our economy.”

But not all respondents agreed. One person noted that the “uncertain political agenda” could have an impact on the future of the industry.

Another 13% of respondents credited their positive outlook to the time of year. “Spring market, new products, [and] improving economy” commented one dealer. While others were excited that tax season is almost here. Ultimately, the consensus was that “selling season coming. [With] warmer weather and more daylight hours.”

What will be next for the automotive industry? Will we see an increase in sales as temperatures rise and refunds roll in? What can you do to safeguard yourself against volatility in the market do to external factors?

To find out more about how to motivate a lot more customers into your store today, regardless of inventory, seasonality or inventory trends, CLICK HERE to download your FREE executive brief.