THE DIGITAL MARKETING LIE THAT CAN COST YOU BIG 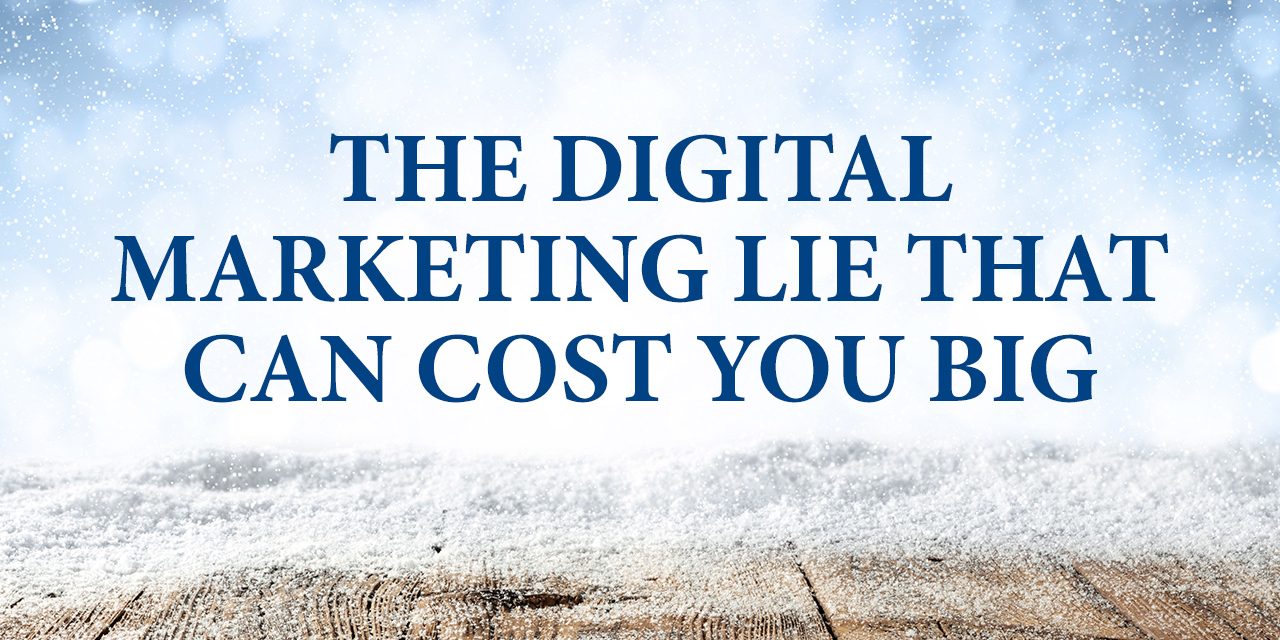 HOW SEO IS WASTING YOUR TIME AND KILLING YOUR BUDGET

Simply put, if you are ready to have a dominant digital presence it’s time to dump SEO. The world of digital advertising might seem like behind-the-scenes magic with lots of three-letter secret codes —CPCs, CPUs, VDPs, SEO — that mysteriously generate results, at least according to your digital marketer. But, the reality is not everything does. In particular, SEO could single-handedly be burning through your budget and wasting your time.

SEO attempts to improve your search engine rankings, using hundreds of sneaky combinations, but you already know the importance of ranking in Google. What we want to tell you is that SEO is not the best way to get there.

Here Are The Three Biggest Problems With SEO:

Have you ever participated in a trust-fall? You know, where one person falls back and trusts their partner to catch them? SEO is like that. Blind faith. Your digital marketer could be a genius. They could put weeks of time into your website to improve your ranking. Then, overnight, Google could eliminate all your progress.

Steve Fitz, Managing Director at Digital Domination explained, “An SEO agency will optimize the website for those specific phrases, but ultimately the power is with Google as to what you do and don’t rank for. That power can’t be understated either. Because as many businesses found out over the last couple of years, Google can change their algorithm and wipe your rankings from their search results.” Essentially, Fitz is saying that a captain of a ship can be the best pilot there is, but still be no match for a hurricane-sized wave. No matter how good your digital marketer is, Google can still destroy your entire presence with a single update.

Having a successful SEO campaign relies on a thorough understanding of the Google Search Algorithm. However, it’s nearly impossible to do this since Google is continuously updating and optimizing. Don’t believe us? Check out this list by Moz of all the SEO updates over the previous years.

Now, you might be thinking “Ok, Google can change the algorithms all they want, but if I’m on top of the page who cares?” Well, when Google changes it’s algorithm, your progress is not saved. Your top spot could be ripped away. Your presence above the fold could vanish. You could even plummet all the way off the first page.

Not only is SEO incredibly unpredictable, but it also requires a HUGE amount of time to create an impact. In fact, according to Forbes, you are looking at a time investment of 4-6 MONTHS MINIMUM. Imagine the opportunities lost in six months of being static. That’s a lot of time to throw away.

There is no way to cheat this system either. “If you can’t budget for 6 to 12 months of SEO, you might be better off putting that budget somewhere else. Paying for just a few months of SEO is, in many cases, no better than throwing your money away,” Josh Steimle, a writer for Forbes said. Committing to an SEO campaign is essentially paying for a one-year lease on a house you don’t get to see for the first six months. Are you willing to waste that time?

IT COSTS… A LOT

Not only does SEO take a lot of time, but it is also expensive. On average, an SEO campaign can cost you $1,501 to $5,001 per month depending on your project. On the low end, you could be paying $9,000 for a 6-month campaign. At the high end, you could be spending up to $30,000 according to Moz’s SEO Company Survey, which polled more than 600 companies. Does something as fragile as SEO sound like it’s worth $5,000 per month? If not, then it might be time to try something else.

But what’s a better option?

Imagine if we gave you two choices. In one hand, we had a guaranteed $100,000. In the other, we had a 50/50 chance at $150,000, but there’s a handicap that at ANY moment we can take our money back. Which option would you choose? The first one? The one where you walk away with a guaranteed $100,000? Google Adwords is just that. A guarantee. If you’re not familiar with Google Adwords, they are the paid ads you see at the top of a Google search.

“Ads take priority over everything. The first three to four things you see are ads, regardless of the search. To see any organic results you are going to have to scroll down through all of the ads,” said Rich Bolandi, the Director of Digital Marketing at Gravitational Marketing. That means even if you take a risk on an SEO campaign, a competitor investing in Google ads could still appear above you.

SEO might be worth it if you have the time and the funds of a massive company. But you’re in the car business and you needed results yesterday. With quotas to meet, cars to move, and your business on the line, you do not have six months to waste on an unstable campaign. SEO is a long, dangerous, winding road while Google AdWords is the highway to a strong digital presence.