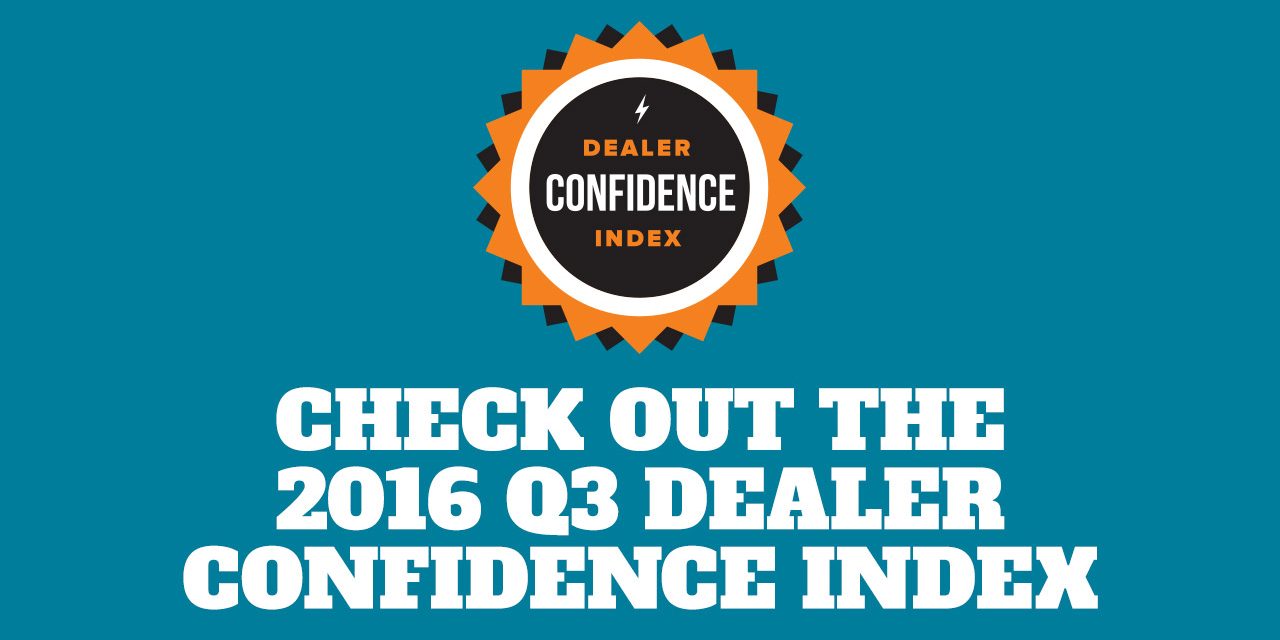 The current Dealer Confidence Index stands at 17.7, which indicates that dealers are moderately confident and optimistic about the state of the business.

The Present Situation Index for the third quarter of 2016 now stands at -1.3, a glib outlook for the current state of the automotive market for car dealers. Dealers’ reporting that the current business conditions are “bad” ranked at 34.7% of respondents. Respondents reported a variety of concerns in terms of their current outlook, including the election, more stringent banking regulations, and a seasonal dip in automotive purchases.

Some respondents noted that more restrictions from the banks have had a negative impact on current traffic trends. One wrote, “Changes in [the] industry and tightening of banks” were affecting current business. Another noted a “declining economy [and] tightening credit.” The Senior Loan Officer Opinion Survey On Bank Lending Practices (SLOOS) released at the end of each quarter confirms these concerns.

October’s SLOOS survey demonstrated both a rise in demand for loans as well as tougher restrictions. While 16% of domestic banks are reporting a stronger demand of auto loans, 8% of banks report tightening standards. That’s an 11% increase in banks reporting tightening lending strategies for the auto industry.

This could explain why one respondent noted that “potential customers are unable to get financing.”

Leading into the heated election on November 8, 17% of respondents expressed concern that the race could be negatively impacting business. One respondent noted that the “election is making people on edge,” but most surveys seemed to show hope that things will calm down after the election.

Meanwhile, the Expectations Index stands at +36.7. Dealers’ assessment of current conditions relied heavily on the impact of the lead-up to the recent election. Most respondents recorded a more positive outlook during the coming months.

In fact, 61.3% of respondents have a “good” outlook for the industry and their business over the course of the next six months. Many respondents credited the end of the election having an immediate positive impact, with the onset of tax time occurring within this period providing an extra bump in both sales and traffic.

What Will A Trump Presidency Mean For The Industry?

Many respondents indicated they are relying on things “return[ing] to normal” after the election, as well as increased “confidence in the state of the economy” which will inspire more consumer spending. However, despite what pre-election polls predicted, Donald Trump became the President-elect on November 8. What will that mean for the auto industry? Only time will tell.

Campaign promises related to NAFTA and increased tariffs on all goods imported from China and Mexico that could trickle down from impacting merely manufacturers to also affect dealers. However, the United Auto Workers union has agreed to work with Trump on the NAFTA deal.

Moreover, Trump’s proposed tax breaks and relaxing regulations could be good news for the industry.

Regardless, Trump’s presidency promises to be anything but the “business as usual” that some respondents had hoped would return after the election.