Finally! A Call Cadence For Your BDC That Produces More Appointments And Sales. 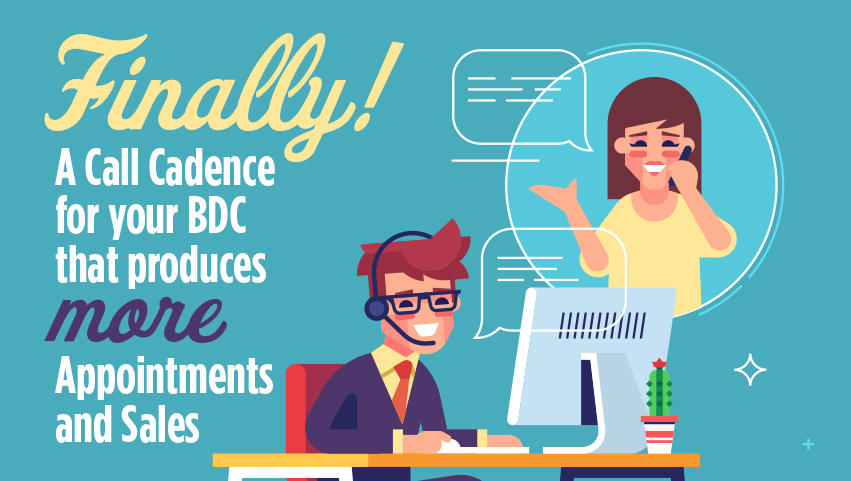 Check any BDC in the country and you are virtually guaranteed to find that not enough calls are being made to each prospect and that leads are not being reached fast enough.

The reason is that many BDCs lack a strategic method for determining call flow and lead priority scoring. And even if they had a strategy, it is virtually impossible for a human being to manage call flow logic and lead priority scoring on the fly. And yet in nearly every BDC across the country, you’ll find people staring at their workflow trying to decide whom to call next.

This doubles or triples the amount of time required for each dial attempt as your employees spend a giant chunk of their day staring at their screens, reviewing notes, weighing options and considering what to do next.

Meanwhile, with each minute that ticks by, your leads are losing viability because a lead’s value drops like a rock as time passes after the lead has opted-in. In fact, some studies have shown that a lead called in the first five minutes has a ten times greater chance of being reached than a lead called just one hour after being created. A one-day-old lead is nearly worthless compared to a five-minutes old lead. Not only does connect rate drop severely as time passes after lead submission, but the likelihood that a lead will schedule an appointment also nosedives. Our research shows that a lead called in the first minute after submission schedules at a rate of about 70%, but the schedule rate drops to just 49% at the 10-minute mark and continues the free fall as time passes. And yet, most lead response teams spend most of their time calling old leads and deciding which of the old leads to call next, rather than striking while the iron is hot in the first 30 minutes after lead creation.

But we’ve put together a cadence that increases the likelihood you’ll reach leads in the golden window of opportunity that occurs shortly after lead creation. Notice that 50 percent of the calls occur in the first 48 hours, with the other half of the calls being spread out over the course of a month.

Using this cadence will increase the likelihood that you’ll reach a lead before their value drops off a cliff. If you’re finding that your team is unable to manage the logic and call flow manually, look into a system that can do this work for you, like Call Commando.