This month’s BIG IDEA is to start motivating A LOT MORE customers to your dealership by tweaking your marketing to tap into a hidden market of customers that are dreaming of driving a new car, but aren’t currently shopping.

You see, the general public is flooded with commercials. All commercials really, but especially car commercials. From the slick Madison Avenue spots run by manufacturers to the direct mail pieces and inserts jammed in every mailbox to an endless stream of radio spots run by every local dealership, you can’t turn on the TV or check your mail without being swamped by promotional material.

Your marketing is invisible to the majority of the market. They just aren’t listening, which means you’re burning money with no return on investment.

If you analyze the overall market, you’ll find that only about two percent of the people in any geographic area are currently shopping for a vehicle, be it new or used. These are the Active Shoppers. It makes sense that most dealerships focus their marketing and sales efforts on the sliver of the market (the two percent) that is actively shopping and ignore the 98 percent, after all these people are naturally listening to and looking out for your advertisements.

But Active Shoppers also stay up late at night stalking dealers’ web sites, doing research, trying to determine how to get the absolute lowest price on a car. They aren’t satisfied until they find one listed at or below invoice.

The unseen opportunity that’s hidden from most dealerships is lying dormant in the 98 percent of people who aren’t shopping. We call these people are Sleeping Buyers because though they aren’t actively shopping right now, they are dreaming of getting a new car, and any dealership has the power to activate their desire and create incremental sales at will. These are people who haven’t done much research and don’t know (or care) what you paid for the car. These are people who are excited to get a new car and are willing and eager buyers, as long as you can help them get what they want.

But how do you market to these people?

Here’s the secret: Create ads that speak to them.

One reason Sleeping Buyers may not be shopping is that they’ve taken themselves out of the market because they believe they have a credit or financing issue that will keep them from getting a loan. Maybe they’ve tried to get approved in the past and have been turned down or they’ve just been reading the paper, watching the news, talking to their friends and, based on their own situation and their viewpoint of the economic situation at the time, they do not feel it can happen for them, even if they want it to.

And since their car isn’t broken and they don’t think they can get approved for another one, they are not going to set themselves up to be disappointed and face ridicule. They’re out of the game mentally, and because they’ve taken themselves out mentally, they don’t even see your ads.

Another reason Sleeping Buyers may be out of the market is because of a trade issue. They already have a car and they’re either making payments on that car, or they may believe they owe more on the car than it’s worth. Most important, they believe they cannot get out of that car. Most people inaccurately assume they have to pay off their current lease or loan before getting another car. Obviously that’s a false assumption. Can you imagine if people thought that way about their homes?

But if you adjust your ads so that you speak to these fears and concerns as well as to their dreams of driving a new vehicle, you can wake these shoppers up. By selling solutions to their problems, you’ll take yourself out of the commodity game and start standing out and selling more.

The BIG opportunity is waking up the Sleeping Buyers. If you can cause them to sit up and pay attention, to act, to come in today, you will tap into a HUGE opportunity because there are an almost unlimited number of those people out there, and most dealerships are not communicating with them at all.

For more information and to see just how big the Sleeping Buyer opportunity is in your market, request a FREE Traffic Scale Report at www.TrafficScale.com. Every Dealer Needs To Know About Market Change Got a question? Let us do the work. We’ll dig up the answer for you. Just email it to:
question@trafficinstitute.com

The past couple of years there’s been a lot of talk about how to optimize vehicle display pages in order to increase the likelihood a customer will purchase a car. The thought process behind this is that when a customer is doing research online, they’ll form an attachment with a specific vehicle because the information, pictures and experience on the VDP speaks to them. But we’ve found this to be dead wrong. In fact, extensive VDPs just make it easier for customers to check you off their list. The most important thing your website can do is convert a visitor into a lead by collecting their name, email and phone number, giving you actionable information, so you can follow up with the customer and demonstrate that you are the right choice to do business with, no matter what car they saw on your website.

We can show you how! Check out our tips here:
www.QuestionOfTheMonth.com

Tip From The Top

Pull more customers to your dealership

Many car dealers have been duped into believing that the only way to attract more customers and grow their business is by competing on price. But we know that there’s a better way. There is a way you can start attracting more customers today.

Check out the 5 Ways To Attract More Customers Without Spending More On Advertising here: TrafficInstituteTip.com

Every Dealer Needs To Know About Market Change 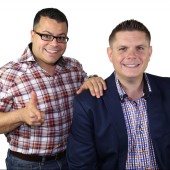 Jimmy Vee & Travis Miller are the nation's leading experts on attracting customers and the authors of the best-selling books Gravitational Marketing: The Science of Attracting Customers and Invasion Of The Profit Snatchers. Called "The Penn & Teller of Marketing," Jim & Travis have been helping auto dealers differentiate themselves, attract customers and increase sales for over a decade. In 2004, they created Gravitational Marketing®, an exclusive customer attraction agency for busy dealers who want to stand out and sell more without spending more in advertising. It is THE place for fun and profit in the car business. Collectively, their campaigns have resulted in the sale of over 2 million vehicles. Every month they create record-shattering automotive promotions and bring together some of the brightest and most successful dealers, authors, entrepreneurs and business people to participate in fun and insanely profitable think-tank mastermind experiences. Jim and Travis believe life and business should be ESP–Enjoyable, Simple & Prosperous®. They help make this a reality through their work at Gravitational Marketing®. Jim & Travis have spoken all over the world on their special brand of customer attraction and have been seen on or in Entrepreneur Magazine, Inc. Magazine, Investor's Business Daily, Ripley's Believe It Or Not, Forbes, CNBC, Fox Business, Advertising Age, Direct Marketing News, Businessweek, Brandweek, Used Car News, and many other publications and media outlets. Jim and Travis both reside in Orlando, Florida, each married with two young children.